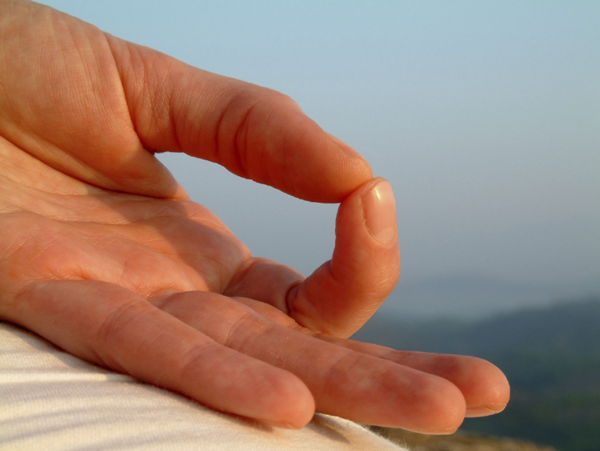 Yoga is the practice of self satisfaction. In the yoga eight steps of yoga are usually practiced. Mudras are also very important. Mudras are a non-verbal mode of communication and self expression consisting of hand gestures and finger postures.  Mudras are developed forms of asanas. In asanas, senses are primary and prana is secondary, whereas in Mudras senses are secondary and Pranas are primary. The scriptures of yoga also described there is no action on this earth gives the same results as of mudras. For convience the benefits of mudras can be described in two categorie.

The whole universe is constituted by five elements. Our body has also been made from the union of five elements. The five finger in our hand represent the five elements. The thumb represent fire, index air, middle finger space, ring finger earth and little finger water. The body remains healthy if the five elements are in balance whereas any disturbance in this balance results in disease. According to the science of Mudras, the co-ordinated action of these five elements controls in the internal glands, body parts and their function regulated and dormant powers of the body are awakened.

The hand mudras become effective instantly. The hand by which these mudras are made, the part of the body opposite to it start showing sings of effect immediately. These mudras can be performed in any way while standing, sitting or walking. If is more beneficial to perform them during Vajrasana, padmasana, or sukhasana. Practicing mudras daily for 10 minutes in the beginning and later on doing for 30-40 minutes give complete benefits. While doing mudras the fingers that are not being used, should be kept straight.

Gyan or Dhyana Mudra: Touch the tips of the thumb and the index finger with each other, keeping the remaining fingers straight. Can be practiced at all times while sitting, lying, standing, walking or even talking. For good results should be practiced for 24 minutes continuously. Can be practiced for 4-5 minutes also at one time. If a mudra cannot be made in both hands, you may do it in one hand only