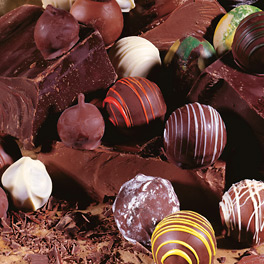 There is a branch of Ayurveda called Vajikarana (Aphrodisiacs) which means to make the sexual power as like as the horse. This part looks after the problems related to sex, mating and reproduction. It means the problems for both male and female to participate and prepare for sex are solved in this part of Ayurveda.

From the hormonal point of view , sexual excitement is driven by androgen and estrogen, love is made romantic by dopamine and nor-epinephrine levels and attachment by oxytocin and vasopressin. Now days, although of many modern inventions the rate of infertility the sperm count, erectile dysfunction, unsatisfaction are increasing day by day. So to be perfect to run a family life one should have to manage this things properly. So let’s, talk about a food which we are consuming everyday and even every hours but aren’t aware of its effect on us.

Chocolates the food of love and also the food of so called problems too. Now days not only small childrens, teenagers and old people too are fond of chocolates. It can cause so many teeth and gum problems mostly to the frequent users and careless users. Leaving that side and talking about its positive aspect. It’s a reknowned aphrodisiac. Aphrodisiacs are such drinks and foods that increases the libido levels of our body thus creating desire on us.

In the same way, chocolates triggers the brain to release endorphins (the happy hormone) that quicken our pulse and makes us feel more romantic. The brain feels as it is in a state similar to being “in love”. Chocolates contain phenylethylamine (PEA) which released dopamine in the brain. Hence the hormone once released works as a romance modulator.

Once, there was a research in Italy, which found that the house wives which do consume chocolates daily had higher libidos better arousal and move satisfactions. And whole goal of this branch of Ayurveda i.e. Vajikarana is to provide the above mentioned satisfaction. In some aspect it is fulfilled by chocolates. So, chocolates may be bad on other angles but are good aphrodisiacs.