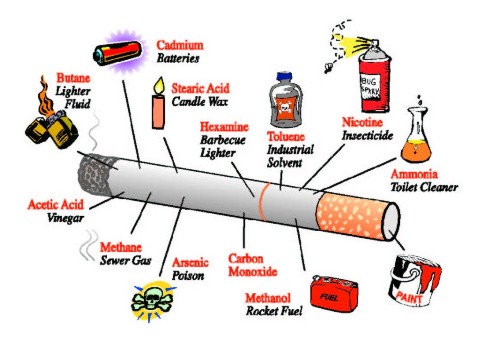 Tobacco smoking is the preventable and prevalent cause of death and disease. Long term smokers may develop the cancer due to long term inhalation of tobacco smoking. Smoking is injurious to health particularly to infants and children. Tobacco use leads most commonly to diseases affecting the heart and lungs. There are over 19 known chemical carcinogens in cigarette smoke. Tobacco also contains nicotine, which is a highly addictive psychoactive drug. Yearly million of people lives due smoking and serious disease by bad smoking habit. If you can stop smoking atleast you can add 5 years to your life span.

Tobacco contains 4% by volume of C0(Carbon monoxide). Inhalation of CO is greater than 02. Thus showing the level of CO in haemoglobin increased. Cigarette smoking is one of the four major acquired risk factors for myocardial infarction, hypertension, diabetes mellitus, hyperlipidaemia, artherosclerotic and sudden cardiac death. increased platelets aggregation and accumulation of CO in blood produces carboxyhaemoglobin and eventually hypoxia.

Smoking is very much harmful for the respiratory system. inhalation of smoke also cause a more chronic swelling of the mucous membrane of airways. A reduce pulmonary ventilation capacity may cause small volume of oxygen to reach alveoli, result impaired oxygen gas. Heavy oxygen is most identified factors implicated in the causation of chronic bronchitis and emphysema.

As mentioned earlier, this list of long term effects of smoking may convey the life threatening diseases as consequences. We know that smoking kills and that quitting makes sense but what about the the effect on others? The effects of cigarette smoking are destructive and widespread. Smoking is nothing it is like slow poison which effects physical, mental, and psychological health finally leading to death. It effects all the bodily system and harm about all the organs of the body so Stop smoking and remain healthy.