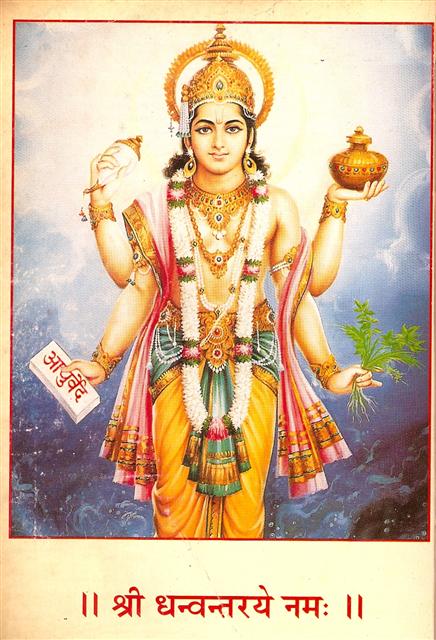 Dhanwantari jayanti, the birthday of lord Dhanwantari is being celebrated on 13th lunar day of darker side in the hindu month of Kartik (Oct/Nov), the third day of Diwali festival. The day is also know as Dhantrayodashi or Dhanwantari Triodasi. Dhanu referred in the word Dhanwantari symbolizes sorrows and Dhanwantari  means destroyer of sorrows. People worship Dhanwantari, who is the God of Ayurveda on this auspicious occasion.

Who is lord Dhanwantari? 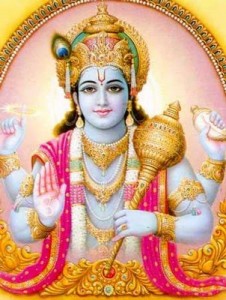 According to the Hindu Scriptures and tradition, Dhanwantari is an incarnation of lord Vishnu. Lord Vishnu himself incarnates as lord Dhanwantari and reestablishes the tradition of Ayurveda in the world to help relieve some of humanity’s suffering. As per the Vedas and Puranas, Dhanwantari is considered as the physician of Gods. Dhanwantari is the father of Ayurveda (oldest medicine system) and earliest practitioner. Ayurveda is the stream of knowledge passed from generation to generation, much in the same way as the vedic literature and vedic scriptures. He was the world’s first surgeons being a very skilled surgeon according to the standards of his time, he is widely believed to be the pioneer of modern medical practices like plastic surgery. He was also known for his skills as a Vaidya, especially in the department of surgery. Acharya Sushruta (father of surgery) learned his skills in surgery from Lord Dhanwantari.

The birth of Lord Dhanwantari is mentioned in Shreemad Bhagwat and Sushruta Samhita. During the time of churning the ocean of milk by Gods and Demons for Amrita (nectar), Dhanwantari emerged from the vast ocean with the pot of Amrita. He was born to protech living beings from untimely death, disease and sorrows.

Lord Dhanwantari appears holding Amrita Pot(nectar pot), Shanka(Conch), Chakra and herbs in his for hands. Herbs symbolize medicinal healing. As the churning continued, lord Dhanwantari appeared, he was strongly built his chest was very broad and his complexion bluish black. He had strong arms, reddish eyes and moved like a lion. He was clad in bright yellow, his curly hair was anointed with oil and he wore shining earring made of pearl.

Lord Dhanwantari is worshipped all over the world as the God of medicine. On the day of Dhanteras, birthday celebration of Dhanwantari, the God of health, take place in an enthusiastic and delightful atmosphere. On the same day Goddess Mahalaxmi  also born. So Laxmi puja and Dhanwantari jayanti falls in the same day.  It is celebrated by the practitioner of Ayurveda, traditional medicine and all health practitioners. People worship Dhanwantari by lighting earthen lamps on the threshold of their houses are blessed with good health and are protected against untimely dealth. It is believed that worshipping the lord on Dhanwantari jayanti would bless the people with good health. It is written in the scriptures that, “One who remembers the name of Dhanwantari can be released from all disease”.