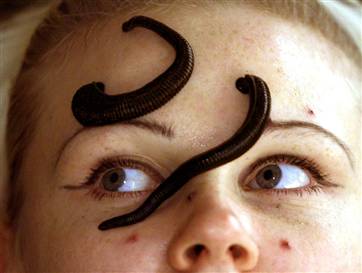 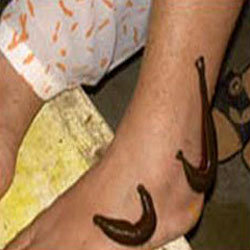 The term “Raktamokshana” comprises of two words, ie., ‘Rakta’ & ‘Mokshana’.
Rakta: The word ‘Rakta’ means: coloured, dyed, tinged, painted, Red, crimson, blood red.
Mokshana: The word ‘Mokshana’ is derived from the root ‘moksha’ means ‘to relieve’ or ‘to let out’. Therefore letting out of blood is known as Raktamokshana.
Raktamokshana is considered one among Shodhana procedures. It is the localized treatment not considering the vitiation of the doshas. It is an important therapy in shalya tantra (surgery) as is basti (medicated enema) in kayachikitsa (medicine).

Extraction of vitiated blood from the body by using Sastras and Anusastras is known as Raktamokshana. Kusta, Visarpa, Slipada etc. are some of the diseases caused due to the vitiation of blood. Therapeutic toxic blood letting involves releasing toxic blood from various body sites, although mainly from the back. At first blood should be dark or purplish. When it turns bright red, therapy is complete. Two to 8 ounces is the general amount of blood released.

Raktamokshana is of two main types:

Pracchana: scratching with a sterile scalp is indicated to drain the accumulated blood from a particular point.

Sira vedhana: Venepuncture is devised whenever vitiated blood circulates in the body.

Jalouka prayoga: Deep-seated blood can be extracted with the help of leech application.

Shringa: To extract the blood vitiated by Vata, shringa or deer horn is indicated.

Ghati yantra: To drain the vitiated blood, which has settled in different layers of the skin, cupping is useful.

Rakta Mokshan is not used on babies, the elderly, during pregnancy or menstruation or with anemia, edema, leukemia, bleeding or cirrhosis. Generalised swelling, swelling in debilitated persons, caused by sour diet and that in those suffering from Pandu, Arshas, Udara, Shosha and in Garbhini.