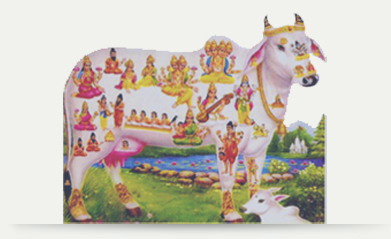 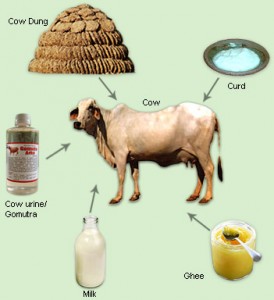 Panchagavya prashan is a practice in vogue amongst devour Hindus for millennia. It involve the five by products of Cow viz. Dung, urine, milk, curd and ghee mixed in a copper vessel. A small quantity of a dose 0.5ml is administrator to all people orally in a year. This is the traditional practice in hindu culture as described in the Ayurveda medicine System. The products of cow either dungs, urine are very important medicinal purpose and Cow is taken as very holistic purpose. This practice was expected to deliver a person from all the sins. This ritual practiced once every year during july and August at which time, the vaccine viraemia is at its peak in cow. Now the modern medicine as described the alternative advance technology of essential immunization vaccines.

Mechanism of this concept:

Cow dung is expected to harbor all the enteric organisms since it is a season when the vaccinia is rampant in cows, it is expected that the vaccinia virus is secreted in to all the secretions and bodily excretions of cow. When the dungs is treated with acidic urine especially in Copper container which ionizes, the organisms undergo definite attenuation. Attenuated intestinal organisms is cowdung will include typhoid, tetanus, tuberculosis bacteriae and vaccinia virus etc. even the polio virus is an intestinal virus.  In other words it is a novel technology of oral vaccination, every year a repeat administration accts as a booster dose.

There need of the further research to prove the hypothesis it has IgA. It is quite possible that results may prove this hypothesis correct. If so then the practice of Panchagavya Prashan can be cheap and safe alternate mode of vaccination with a booster dose given every year. This can be the most scientific way of immunization as described by the Scholars of Ayurveda. This concept of ayurveda need to be researched to prove it as an alternate technology to the vaccination.  The ayurveda way of immunization Panchagavya Prashan is not very popular with lack of evidence and study so there is need of enough evidence for believing in the existence of knowledge with regards to immunity and immunization techniques in Ayurveda.