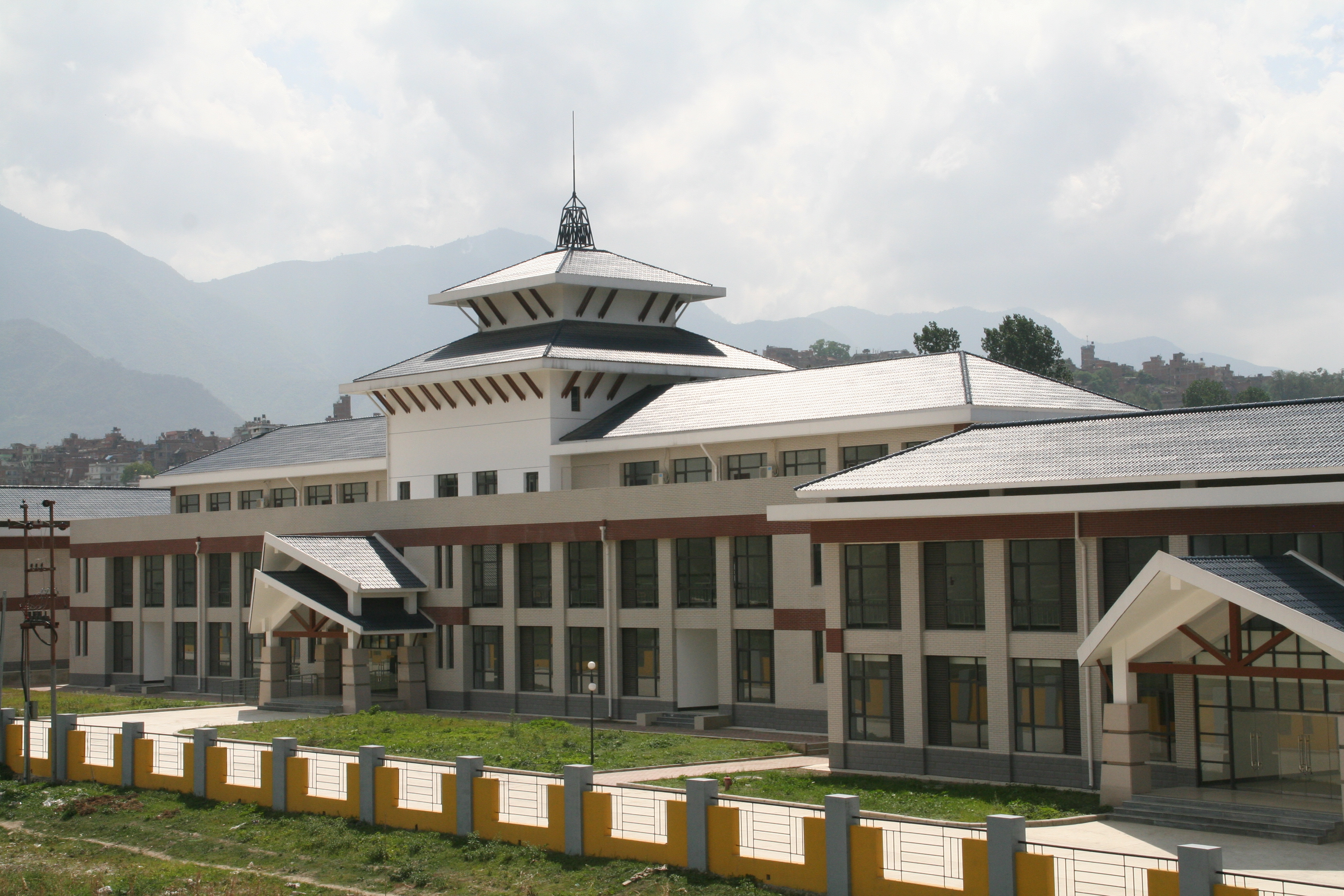 The Government of China officially handed over the National Ayurvedic Training and Research Centre (NATRC), constructed on the premises of the Ayurveda Campus, Tribhuvan University in Kirtipur, to the Nepal government.
According to officials, the Chinese government, which has provided financial assistance to construct the centre, will also provide necessary equipment, infrastructure and training for human resources. The centre consists of a 25-bed  hospital as well as training and research divisions. Its medicinal system i.e. Ayurveda is convincing enough in every aspect of curing disease. Despite being efficient, many of its classical medicinal drugs and pharmacological approach are not scientifically lab-tested. So, there is a due need of an international-standard research- center in our country.
It is a high profile project of 3 years with estimated expenses of Rs.70 crore.  “The centre will play a positive role in promotion and utilisation of Ayurveda in the country, by conducting research on medicinal herbs available here.”
The center, with 32 ropanis, will bear a high standard building with sophisticated technology to visualize the researchers’ masterpiece. Herbal garden with endangered medicinal plants, animal farm for qualitative research of classical drugs, spacious hostel for research trainee, hi-tech labs etc are its fascinating aspects. A humble effect to recognize and appreciate traditional medical knowledge is a promise from its regulatory body, Department of Ayurveda, Nepal government. The main building with efficient drainage and water supply system is projected to be accomplished in 3 years. After the completion of infrastructures, a year will be allocated for a joint “Nepal-China” running phase. The construction of this center is expected with high enthusiasm and supposed to contribute for Ayurveda to a great extent.
Nepal ranks 25th in the world and 11th in Asia in terms of biodiversity. There are about 264 species of indigenous herbal plants and 3,500 other kinds of herbal plants of medicinal value in Nepal.

An estimated 140 indigenous medicinal herbs have already been patented by foreign medical companies. These include shilajit, turmeric, neem, amla and kalo jeera, according to the Department of Ayurveda under the health ministry.

We hope an autonomous Research and Training Center, nurturing dedicated researchers who can contribute in the field of Ayurveda in the international level. The centre will endeavor to make people know the herbs better, use them and develop their health and economy. It will train more people who will know how to keep people healthy by using natural resources. Works will be done to test Ayurvedic medicines and develop their quality and to identify new potential of the herbs. Thus the result will be that  people live better, happier and safer in the days to come. This is the largest assistance for the first time ever known in Ayurveda sector in Nepal.

China likes to grow together with neighbors. This is the third project China worked out in Nepal in Health Sector, 1st Bharatpur Cancer Hospital, 2nd Civil Servants’ Hospital and 3rd one to be this. Research and training in Ayurveda is necessary to ensure health for all, to achieve Millennium Development Goal. Ayurveda is similar to Chinese medicine in several ways. China will continue cooperating with Nepalese people. This work was finished within 18 months, 2 months earlier than the already fixed deadline, and will be handed to the Department of Ayurveda.
Actually Ayurveda originated in Nepal and then it expanded to India and China. Ancient knowledge is very much helpful to cope with many serious conditions,  is the source of the present knowledge, it’s reliable and cheapest health service to the people. Some people consider eastern knowledge to be unscientific. But many ancient ideas have proven powerful in controlling many diseases, like Chinese use Artemisin against malaria, it works effectively. Lots of thanks to China for its grand support, as china provided such grand building. WHO will provide technical and human resources assistance further for the running of the institution.

China has made great contribution in the development of Nepalese health sector. The Bharatpur Cancer hospital is one of the best centers here in South Asia. Civil Hospital has just started to function. And this project is bound to bring great changes in the health and economy of the people. After the Center starts to function, many drugs will come in user friendly way. Many people will get benefit of many important and rare herbs in Nepal. Qualified and trained man power will be produced to serve people in each and every level. Knowledge will further be simplified so that anyone can be benefited. Government will utilize all sorts of medical system for the health care service to people. People have right to use whichever system of treatment they like. Ministry will leave no stone unturned to take the project to the top.

The people have made our country a republic after revolution. Government has to face the challenges to fulfill the responsibilities to the ‘health rights’ of the people as a mandate of the revolution. Recently government has made primary health and delivery services free. Still many changes are to be made in the government health service centers, like -infrastructures, health personnel, constant supply of drugs etc. For such works we have to foreign assistance.  China’s help, cooperation is highly appreciable. Now we have to do two works: (1) providing Ancient knowledge to new generation, and (2) research and discovery of new facts/knowledge. Many health workers will be trained and people will learn to benefit from their natural talent e.g. herbs after the center begins to function. Ayurveda is our own system of Medicine, our legacy; it has contributed to the society since time immemorial.

The centre, whose foundation stone was laid three years ago, was completed last month. It will also work to produce human resources in Ayurveda by giving them education and training in order to conserve and promote medicinal plants.