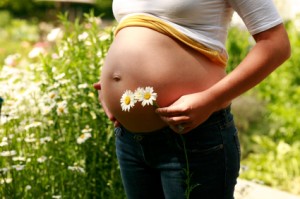 Iron and zinc complete in the intestine towards their absorption. It is advisable hence, not to give iron unless a pregnant woman is anaemic so as to help absorption of zinc and prevent its deficiency. Black sesame seeds are good source of zinc.

Immune maladaptation between invading trophoblasts and decidual leucocytes leads to the release of free radicals, cytokines and proteolytic enzymes. These cause IUGR and PIH. Normally in pregnancy energy requirements increase leading to the release of large amounts of free fatty acids in to liver. This requires large reserve of natural antioxidants in placental mitochondria and as well as liver to prevent lipid peroxidation. Therefore pregnancy is a state of oxidative stress. When this oxidative stress exceeds, it cause PIH (pregnancy induced hypertension) and IUGR (intrauterine growth retardation). It is of interest to learn that mitochondrial SOD (superoxide dismutase) is manganese based and that of cytosol is copper and zinc based again highlighting the importance micronutrients minerals.

With this background of scientific information author tried to arrange the matrimony between the scientific technology and experiential wisdom of Ayurveda resulting into two innovative research formulation viz; Sujat and Torchil. Laboratory and clinical evidence showed that sujat is an Excellent antioxidant and an efficient tool for better pregnancy outcome.