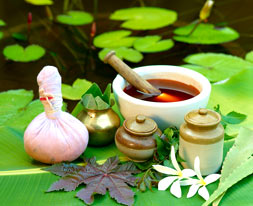 Kerala has the long history of Holistic ayurveda practice from thousands of years. The keraliya Ayurveda practice is from the ancient Asta Vaidya Family. Ashtavaidya is an Ayurvedic practitioner who is proficient in all the eight different branches of Ayurvedic treatment. KeralaÂ’s rise as a prominent center for Ayurveda is in a great way indebted to the selfless service of ashtavaidyans. Thaikkattu vaidyar, Kuttancheri, Vaidyamadam, etc are some of the families usually associated with ashtavaidyans. The different practice system of Keraliya Vaidya make the kerala very specific popular for ayurveda. Ayurveda medicine with rare use of Minerals like mercury, Sulphur, Lead  make it more effective and safe. Mostly the Kashayam Preparation are used instead of Rasa Medicines. The following are the common form of Ayurveda medicines used by the Keraliya Vaidyas.

Either decoction/aqeous extract or fresh juice is made from the crude herbs to which nutrients/sweeteners such as sugar like jaggery, honey or sugar, singly or wholly are added. To the resulting solution certain fermenting aids like Dhataki pushpa etc. and prakshepa choorna are mixed and kept in a fermented Vat for 30-60 days. In this condition alcohol is self generated and the alcoholic extracts from Prakshepa choorna is obtained. It is then filtered and kept for settling such preparation is called Arishtam.

In case of Asavas, the initial step of the preparation of the aqeous extract from the medicines is not carried out. In this case the extraction of medicines are taking place as from the second step of preparation of Arishtam.

The Asava-Arishtas has therapeutically higher potency, clear liquid with pleasant odour. As there preparations mature over a period of time the efficacy also increase.

Medicated Thailam/Coconut Oil: The base of these preparations is either sesame oil or coconut oil. The process consists of addition of water extracts (kashayam), Swaras(juice), Kalpa(Pastes) subjecting the mixture prepared in a regulated temperature. The Thailams are prepared under the basic of reference texts, so the medicated Thailam/Coconut oil having the property and efficacy almost in the same manner since it contains the potent ingredients.it is used generally for inunctions and massage.

The new herbs are collected, identified properly, then cleaned and dried. Each of the ingredients for powdering is pulverised separately and homogeously mixed together and per the formula. Prepare the kashayam (decoction) or Swasrasam (juice) or with water, mix it with jaggery/sugar or sugar candy and concentrate to the required consistancy. The powdered raw herbs is added to prakshepa choornam. Well mixed and laced with Ghee, Honey etc. as per text.

As per the formula the herbs are collected, identified then cleaned and the raw herbs for drying are to be dried. Weighed quantity of ingredients as per formula is made to in to coarse powder, mixed with sufficient quantity of water well boiled and reduced to attain the proper specifications. This properly preserved, tested and packed.

Dose : Dose is fixed according to the condition of the patient and disease. Normal dose is 15ml mixed with 2 times of boiled and cooled water.

The ingredients are collected, identified properly then cleaned are dried. Each of the ingredients is pulverised separately and homogenously mixed together as per the formula. This powders are used directly or with additives or used for making decoction or Thoyam according to the condition of patients and disease.

The medicine from plant origins, or animal origin, mineral origins are collected, identified properly and cleaned. The ingredients for making powders are to be dried and pulverised separately and then homogenously mixed together and ground into the base as per the formula up to the proper consistency for making gulika/Vati/Vattu/Tablets. The medicines which requires purification, are identified and purified as per the textual reference and the purity analytically checked to ensure the medicine is devoid of side effects.

The process consists of addition of water extracts (Kashayam), Swaras (juice), Kalka (Pastes) subjecting the mixture prepared to regulated temperature. The Ghrutam are prepared according to refercence texts. So the medicated Ghruthams are prepared according to reference texts. So  Medicated Ghee Ghrutham has the property of the active and potent ingredients. It is used generally for inunctions, Tharpanam and Massage.