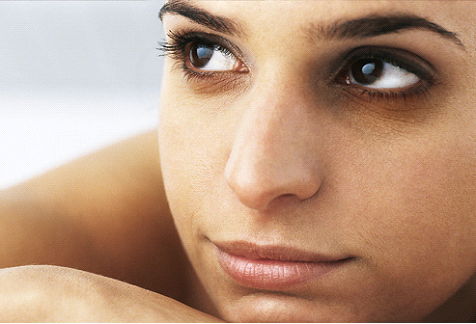 There are many reasons why dark circles may occur. Knowing these reasons will help to avoid them and thus get protection from these ungainly blemishes on the face.Dark circles are formed under the eyes. They are dark blemishes that surround the eyes and thus spoil the appearance of the face. They are also known as eye circles and are sometimes referred to in slang as bags under the eyes.

These causes are:
1. Lack of sleep
2. Extreme tiredness
3. Improper diet and nutrition
4. Stress
5. Hormonal problems
6. Advancing age
7. Hyper-pigmentation of the skin
8. Exposure to heat and sunlight
9. Excessive intake of some drugs

According to Ayurveda Dark circles are caused due to vitiation in the vata and the pitta doshas. These are the elements governing the air and the fire elements in the human body respectively. It has been found that yoga is very beneficial in reducing dark circles. Pranayama and shavasana help the mind to de-stress. Such asanas are prescribed for people with dark circles.
Once the dark circles have appeared, it is very difficult to get rid of them. There are many cosmetic creams in the market that claim to eliminate dark circles, but dark circles can be only removed by a healthy lifestyle. There are some ways in which dark circles can be reduced. These methods are mentioned in this article.

Useful Herbs/Plants in the Treatment of Dark Circles

1. Apple (Malus domestica)
Apples contain tannin which helps in reducing dark circles. In addition, apples also contain potassium and the water soluble vitamins B and C which can replenish the lost nutrients in the skin under the eyes.

2. Cucumber (Cucumis sativus)
The cucumber is a very cool vegetable. For this reason it is used widely as a treatment for eye circles. The cool juices of the cucumber help the eyes to de-stress, which makes the dark circles disappear within a few days.

3. Potato (Solanum tuberosum)
The starchy content of the potatoes helps in the treatment of dark circles. Both the peel and thin slices of the potato can be placed over the eyes to get good results.

4. Rose (Rosa cordifolia)
No other treatment for dark circles is as common as the extract of rose petals, known as rose water or gulaab jal. Rose water soothes the eyes and removes their redness. It also rejuvenates the skin around the eyes. This reduces the eye circles. Rose water can completely eliminate the dark circles if used persistently for a few weeks.

Dietary Treatments for Dark Circles
Keep your diet very healthy if you want to get rid of your dark circles. Many Ayurvedic doctors would agree that the first treatment of dark circles begins with correcting the diet. The diet must not be too dry. Use lots of water in the preparation of dishes in the form of gravies, daals, soups, etc. Cook your food in a little fat to reduce the vata vitiation. Drink lot of water throughout the day. Also consume fresh fruits that have high water contents.

Dark circles under the eyes are often formed due to accumulation of toxins in body. Ayurvedic body cleansers (Herbal body cleansers) expel these toxins and purify the blood. The herbal under eye gel, when applied superficially,  the skin texture is improved and skin is rejuvenated. The Herbal under eye gel  also reduces the wrinkles below eyes and nourishes and tones the delicate skin around the eyes.