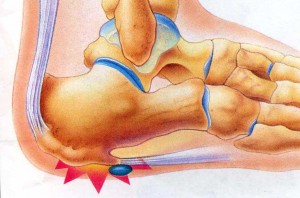 A heel spur (or osteophyte) is a small bony growth or collection of bony growths on the back or underside of the heel.  Symptoms include Stabbing pain under the heel, Mild inflammation of the heel or ankle joint are the cardinal features of this illness, Often numbness is also complained by some individuals. Ayurveda describes this condition as vatakandaka ,condition resulting due to kaphavata vitiation, Ayurveda clearly mention this condition as treatable. In Ayurveda this condition occur due to the excessive kapha vitiation resulting in the enlargement of bone and this enlargement or obstruction in the path of vatadosha which mainly controls the sensory and motor activities resulting in severe pain along with some burning sensation on some cases.  This condition is usually diagnosed on X ray and physical examination.  There is very good treatment in Ayurveda as it is described as curable condition without surgery and injections.

All efforts are carried to reduce the stress and strain on weight bearing over the foot.
Three kinds of exercises are specifically useful in this regard-

1. Stretching of the calf muscles– Person is made to sit on his knee position (as like sitting in a chair) and the legs are extended front and calf muscles are gradually stretched upwards; then it is relaxed. This is repeated for 5-6 times in both the legs. Because after once affliction, there will be chances of another leg to be affected by the same complaint as the pain makes the individual to shift the weight to another leg.

2. Rolling exercise-The person is advised to sit on a chair and tennis ball or marbles are placed below the sole and is rolled from front to back.

3. Outstretching of the legs-One of the legs is put forward by standing position. Meanwhile, another leg should remain in straight line with other leg. Back is kept in erect position and knee is bent forward so that the leg below the knee is stretched out for few minutes. This procedure is repeated in both the legs alternatively.

1. Cold and heat therapy-Two bottles (plastic or glass) are filled with cold water and hot water respectively. Alternatively these are rolled with the affected sole. Significant relief in pain can be observed by this. But the effect will be for short duration.

2. Salt water immersion-The person is advised to keep his foreleg/sole on immersion with salt water and can be carried out for 10-15 minutes twice daily.

3. Warm brick fomentation-A brick is warmed (even by keeping in severe sunlight also it can be warmed) and salt water is poured over it. The heel is exposed to the fumes coming out of the brick. This procedure can be done for 5-6 times. Keeping the sole/heel over the lukewarm brick also gives the considerable relief for few patients.

4. Immersion in sour buttermilk-In a wide mouthed vessel, 2-3 liter sour buttermilk is taken (or else to the buttermilk, lemon juice is added to make it more sour) and the sole is immersed in this for a period of 10-15 minutes.

Even though, these do not contribute permanent relief, significant relief is observed in my practice. Some of the effective formulations and combinations of my clinical practice-

1. Rasnadhi guggulu along with Rasnaerandadhi kashaya– in case of pain in the calcaneal area, followed by constipation and aching pain in the foreleg.

2. Yogaraja guggulu along with Dasahmoola kashaya– in case of patients passing the bowel properly and no aching pain is present in the foreleg.

3.Gandha taila along with Jeeraka shatapushpa ksheera kashaya– in case of numbness followed by pain during the out stretching of foreleg.

4. Shirashooladhi vajra rasa (do not think mere name of the formulation)or Vata vidhwamsa rasa along with Jeerakarishta- in case of calcaneus spur worsening (only in winter and rainy season).

5. Vishamushti vati or Agnitundi vati along with warm water in case of calcaneus spur in the non hypertensive patients and who are complaining of radiating pain around the ankle.
External application:Vishagarbha taila is very effective.If the condition is associated with numbness or radiating pain Chinchadi taila is useful.

CS can be compared to Vata Kantaka in Ayurveda.The easiest form of treatment of CS is Ishtika Sweda. It can be performed by the patient itself at home since it is simple and cost effective.

*First of all the painful area of the spur should be given an Abhyangam (massage without force) using any vata hara tailas viz Mahanarayana taila or Ksheerabala taila or Dhanwantara taila. Bricks should be taken and broken into small pieces. They should be heated red hot and dipped in rice washed water i.e tandulodaka or Dashamoola kashaya and immediately tied in a cloth in the form of a bolus. The hot bolus should be placed on the massaged part removing intermittently. Before fomenting the affected part the heat of the bolus should be tested by putting it on the palm by the person doing it to avoid burns. This is not advised in diabetic patients or in conditions where the sensation is disturbed.

*Alternately the brick pieces are heated to tolerable heat and tied in the cloth and sudation is given to the painful part without dipping it in the decoction or rice wash. But abhyanga should be done before the procedure as a rule. Once the bricks lose the heat they are removed from the bolus and heated again. The procedure is repeated.

*In Plantar fascitis without spur, abhyangam with any one of the above said tailas is given and later the patient is advised to keep his foot in the hot decoction of Dashamoola (when it is tolerable) or just in hot water or salted hot water.