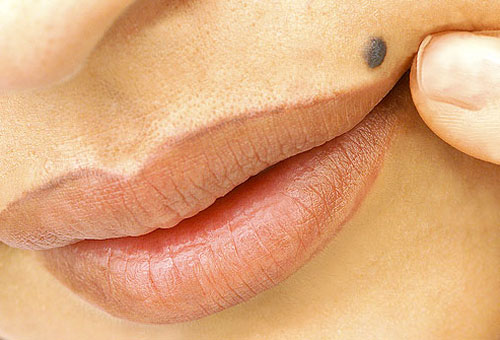 Moles is a general term to descrie spots or blemishes over the skin. MOles are a cluster of pigmented cells generally dark coloured. Moles are various kinds according to skin colour like red, tan, brown and even black. Moles may have wart like outgrowths also and most moles are present from birth know as birthmarks but may also appear later at any age due to specific circumstances. Normally, moles are not harmful and very few such moles are cancerous tumours so there is nothing to worry much. But sometimes unexpected changes in shape, colour, size you may need medical check up and do treatments.
Moles could also have hair growing out of them. The main cause of mole is beleived due to  Over-active melanocytes in the body produce excess melanin resulting in moles. Ayurvedic home remedies and herbs can heal the moles without any cosmetic surgery. These home remedies are completely natural, non invasive based on the Ayurvedic principle which can be done easily at home.

a. Pineapple: Apply few drops of pineapple juice directly over the moles. Repeat this process for several days you will see moles fading or completely diminish.

b. Green tea oil: Apply green tea oil over moles for 8-10 days.
c. Grapes: Wrap a bandage with Few drops of grape fruit juice over the mole for 5-6 hours daily.
d. Onion or garlic: Crush garlic clove and place it over the mole and cover it with bandage.
e. Cauliflower : Apply cauliflower extract on moles daily for somedays. MOle will slowely fade out.
f. Dandelion : Dandelion is effective Ayurvedic plant for moles.Root of this plant can be rubbed over moles several times a day.
g. Flaxseed or Linseed : Apply linseed oil over the mole with the cotton for some days.

Deficiency of Pottassium in food is taken as the possible cause of moles. so you can increase high pottasium content food like Apple, Vinegar, Banana, Mushroom, kindey beans, Tomatoes, Spinach, Potatoes etc. Additional Vitamin A, C and E are good for skin and immune system. Include food rich in Vitamin A, C and E in your diet to cure your moles.

Kashisadi Taila: This is a classical preparation in Ayurveda which can be applied over the warts, Moles under the prescription of Ayurveda specialist. This is very effective medicine as described in Ayurveda.

Mahamanjistharistha : It is  a classical compound preparation to reduce hyper pigmentation of skin.