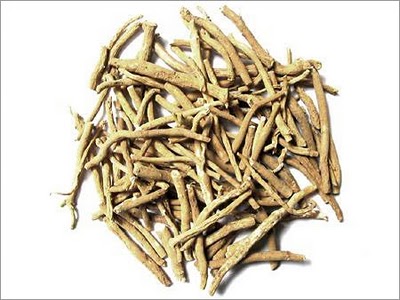 The irony of ashwagandha is that it is a tonic and sedative all in one. It strengthens an exhausted nervous system that can manifest with ‘hyper’ signs such as emotional instability, agitation or feeling stressed out. It has the dual action of energising while calming. Its name ashwagandha meaning ‘the smell of a horse’, comes from the smell of the fresh root (like horse’s urine), and also perhaps because it is renowned for imparting the sexual stamina of a horse.

Tissues Debility, low body weight, emaciation, deficient haemoglobin, anaemia, post-convalescent weakness, athletic exertion and with caution in pregnancy. It is useful for any

imbalance in the muscles as it both reduces inflammation and strengthens muscle tone. It is a specific rasayana for mamsa dhatu and it is an anabolic muscle builder (Caraka,  Bhavapraka´sa, Venkataraghavan et al 1980). As it benefits all muscle tissue it is used as a heart tonic, uterine tonic, and a lung tonic, as well as for increasing muscle weight and tone in convalescents, slow-developing children, and the elderly.

it is commonly used in swollen or painful arthritic conditions. It can strengthen a weakened immune system and protect it from becoming depleted due to immunosuppressive drugs or lifestyle. Improves white blood cell counts. It appears to have both immunosuppressive and immunotonic abilities and is therefore a ‘true’ adaptogen (Tillotson 2001).

Useful in hayfever, allergic rhinitis from aggravated vata and kapha.

Nerves Neurosis, insomnia, anxiety, excessive thinking, ‘hyper’. symptoms and attention deficit and hyperactivity disorder (ADHD). Very useful in all conditions caused by ‘stress’ as it has a specific affinity for the majja dhatu and helps to regulate the movement of vyana vayu in the heart. Its tropism for the nervous system benefits multiple sclerosis (Tillotson 2001). It both relaxes frayed nerves and tonifies the central nervous system to enhance tolerance to stress. It is a nourishing nevine as opposed to a heavy sedative.

unique action or prabhava is to promote sexual potency and sperm production. External application of ashwagandha oil is used for impotence.

Gynaecology Excellent tonic to the uterine muscles. Used in menstrual imbalance caused by a deficient condition with an aggravation of vata and uterine spasms; dysmenorrhoea, amenorrhoea, weakness.

* Pippali for enhancing tonic effect; useful in asthma and coughs.

Caution in excess pitta and ama with congestion. Caution in pregnancy; although traditionally used in India during pregnancy to strengthen the uterus and health of the mother and child. Its spasmolytic activity on the uterus has led certain quarters of western phytotherapy to restrict its use in pregnancy

No drug–herb interactions are known. There are some theoretical interactions between ashwagandha and immunosuppressant, thyroid, and some sedative medications, but these are not evidence-based (Braun & Cohen 2003, 2004, Harkness & Bratman 2003). As ashwagandha appears to have some hypoglycaemic activity in humans it is advisable to monitor blood glucose in susceptible individuals (Low Dog 2002).