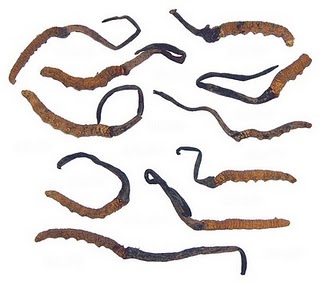 Yarshagumba is scientifically  known as “Cordyceps sinensis”. Cordycapas sinensis is a fungus, parasitic on the larva of a moth, Endoclyta excrescens of the order Lepidoptera. The Tibetan calls it “Yertsagumbu” which means “summer grass winter worm”. The name “ Yertsagumbu” not only very accurately describes the appearance of this medical herb but also betrays a level of biological knowledge based on exact obercation. The parasitic mushroom, at the beginning of the monsoon period attacks a caterpillar (Endoclyta excrescens) recently emerged from its cocoon. Whereas one can observe the caterpillar still alive in spring (winter-worm). It is no longer alive in autumn, at this period of picking. Yarshagumba spores out during early rainy season with a short life cycle and eventually dies out when the climate becomes less humid. Therefore, even if we keep the fungus protected throughout the season, it will yield nothing.

It is distributed from interior China, Tibet to Nepal in the high mountains of the above sea level 300 to 5000m particularly in Humla-Jumla region and mountains of Dhaulagiri range. However, this highly prized medicinal mushroom can be found in the Lamtang valley in July before the yaks come up to their summer pasture and eat it up. The alpine scrub with open slopes is referred to as the best habitat for the fungus.

In medical books of China, it has been described that Cordyceps sinensis is effective for hematemesis of the pulmonary tuberculosis, weak conditions in the convalescence, antiussive, anemia, asthenia, impotence, antimicrobe( Sharma and Adhikari,2057). Therefore, it has high medicinal value. The Medicinal property of this fungus is primarily due to the fungus and of a hormone call melatonin. This hormone issecreted by pineal body of the fungus and has the action of adjusting the rhythm (cardiac) of the body. It also contains cordycepin and other polysaccharides. The chemical cordycepin had been found useful in tumor growth inhibition on kidney, bladder and colon as well as inhibit DNA and RNA synthesis in cancer cells.

Tonics made from the fungus, which is traditionally sold in small bundles of fungus-infected caterpillars, reportedly are responsible for record performances by sone Chinese athletes too.

Researches has revealed that the body of Yarsagumba contains:- Cordycepin acid, Cordycepin, D-mannitol, Polysaccharide, SOD, Fatty Acid, Nucleocide Protein, Vitamin A, Vitamin B1, B2, B6, B12, Serien, Zinc, Copper, Carbohydrates etc. Cardycepin and Cordycepic acid have been found to be the main constituents.

Yarshagumba is currently very popular due to its use as aphrodisiac (sex stimulant) and tonic. Hence, its collection and trade is increasing. The word “Yarshagumba” has been more common, especially in different new published from Nepal, for the last three years. How ever few of us know what Yarshagumba actually is, what uses and other importance it has, and what the legal provision regarding it has been ruled’ even though we touched , seen and /or heard about it. Therefore, it has been tried to deal these aspects of interest.

Yarsagumba is also known as the “Himalayan Viagra” or “Himalayan Gold” for its high medicinal and commercial value. It is mainly used as a treatment for impotency in many countries. Numerous scientific studies and research reveals that it has properties of antibiotic in it. Cordycep sinensis is used for lung and respiratory infection, pain, sciatica and backache. It also provides vitality and increases physical stamina of the body. Yarsa gumba is used by the Chinese to cure chronic hepatitis B and immune function such as dysfunctioning of liver. According to the Hawaiian health products, cordyceptin is found effective against tuberculosis as well as in the treatment of leprosy. Another major use of this is in the treatment of leukemia. It is useful for children, adults, the aged and the sick people. It energizes lung, kidney and liver; improves memory and purified blood; keeps a person physically and mentally sound. It is of great importance for men and women of any age group, players, people working in physical stress, suffering from premature ejaculation and sexually inactive ones. It gradually empowers internal energy of our body in a natural way as well as acts as a powerful aphrodisiac. Unlike Viagra, it does not cause any mental problem or any other type of physical damage or malfunctioning.